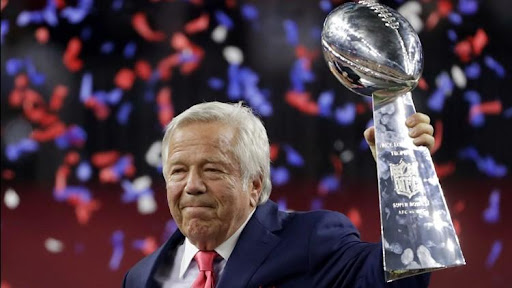 On March 7, it was announced that Robert Kraft would be receiving the Lifetime Achievement Award from the Sports Business Journal. As the owner of the New England Patriots, he’s a visionary entrepreneur who managed to turn a team on the decline into one of the most successful sports franchises in the world.

This is an honor for him, particularly when his influence has stretched so much further than the field. We look at the details of the ceremony, the criteria by which the organizers choose the winner, and how Kraft intends to live his legacy for the rest of his days.

The Sports Business Awards take place on May 18 in New York City. Kraft will join the ranks of legends like Billie Jean King, Jerry Jones, and Tim Finchem for his undeniable role in helping the Patriots ascend up the ladder. With 6 Super Bowl wins under his belt, the mogul is proud of how everyone has come together to achieve some truly remarkable goals.

This recognition is so much more than just sports though — Kraft is a true pillar in New England. Before buying the Patriots, he was just another season ticket holder. Since his first day on the job, he’s managed to exceed even the most stringent of expectations set upon him.

The Opportunity of Ownership

The Lifetime Achievement Award from this publication is a nod to the wins of his team, but it has more to do with how Kraft has used his position of power to do more than just rack up ticket sales.

Executive editor Abe Madkour said, “One big appeal of sports ownership is the path it provides to greater influence in the wider business world and culture. Not only has Robert Kraft built a world-class franchise with Kraft Sports Group, he’s developed close, unique relationships across a world far wider than football, and in doing so, has made himself and fellow NFL owners that much more powerful and successful.”

This sentiment is a powerful one for Kraft, a man who’s spent years implementing programs for his neighbors that benefit everyone. Rather than simply spending his wealth, he’s given back through a number of efforts that have made their mark on the community.

Kraft has been the news of late because he recently celebrated the anniversary of purchasing the Patriots in February, 1994. This three-tiered purchase, which started with the parking lots around Foxboro Stadium and ended with the purchase of the franchise, sparked an immediate reaction in fans. Rather than being jaded about the team’s largely dismal record, they were hopeful of what Kraft could do. In fact, many would wait through a snowstorm the next day to purchase season tickets before they were all snapped up. (Indeed, they were all snapped up for that year and for every year moving forward.)

After establishing the Patriots as worthy adversaries in the NFL, Kraft used his undeniable leverage in the sports industry and to his presence in Major Soccer League. He would become an extremely influential member of the NFL, particularly as the Patriots swept season after season. He would also give more than $800 million through the New England Patriots Charitable Foundation, and co-founded a criminal justice organization. For all this to stem from the love of his home team is a story that few could resist. It’s certainly no wonder that the journal would want to tell it.

A Man with a Plan

Kraft is now 80 years old, but even at this age, he’s an extremely active professional. He continues to play a strong role in politics, sports, and pop culture. He’s an icon to young people today, including Michael Rubin, the founder of the Fanatics, and mogul Jay-Z.

People in the NFL credit him with saving football after a tense labor negotiation with the NFL Players Association in 2011. This master negotiator also managed to work out the details for the media rights contracts with several networks, including Fox, CBS, and NBC. It was his hard work that led to the stunning deal of $110 billion.

Much of Robert Kraft’s philanthropy is driven by his love of the community. Jewish culture, cancer research, community healthcare, and interfaith dialog. When the pandemic hit, he used the Patriots’ private plane to import 1.2 billion N95 masks when the US faced an intense shortage of personal protective equipment.

These are just a few initiatives that have benefited from his generosity, and a major reason why he was chosen for this award. Over the course of his professional and personal life, he’s managed to go above and beyond what anyone expected and Sports Business Journal is just one of many organizations and individuals to take notice.