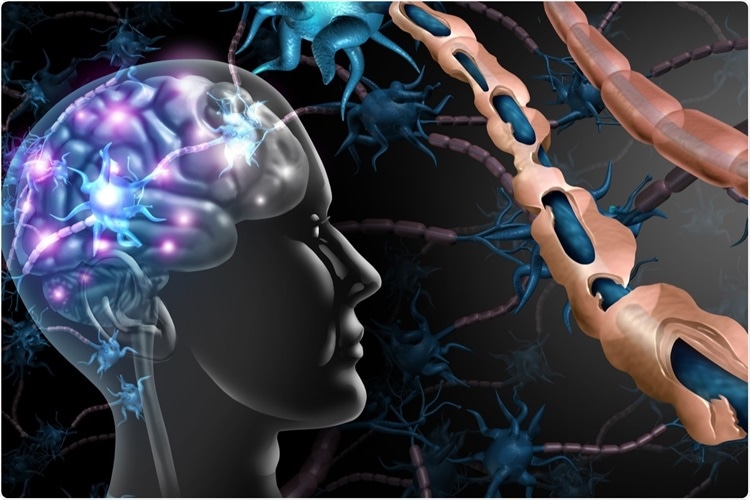 Multiple sclerosis (MS) is a disease that occurs when the immune system attacks the myelin sheath, the protective layer that covers nerve fibers, causing damage to nerve cells in the brain and spinal cord. Nerve cell damage restricts communication between certain parts of the nervous system and consequently leads to physical and cognitive problems.

There are four different types of multiple sclerosis:

Relapsing-remitting multiple sclerosis (RRMS) is the most common form of the disease, accounting for 80% of diagnoses. Most patients are initially diagnosed with RRMS before the disease progresses to another form. It is characterized by an onset of new symptoms or worsening of existing symptoms. These relapses are followed by periods of remission, during which symptoms decrease or in some cases disappear completely.

Primary progressive multiple sclerosis is less common, occurring in only 10% of patients. It is characterized by progressive development of symptoms, without episodes of relapse or remission. Improvement of symptoms is rare, but in some cases, patients experience periods during which the condition stabilizes.

Secondary progressive multiple sclerosis accounts for 50% of diagnoses. It usually develops as a result of disease progression in patients with an initial diagnosis of RRMS. The symptoms of the disease steadily worsen over time and the number of flares decreases.

Incidence and prevalence of multiple sclerosis

Multiple sclerosis is the most common autoimmune disease affecting the central nervous system. In 2010, approximately 2.5 million people worldwide were living with multiple sclerosis (30 cases for every 100 000 people). The incidence varies considerably from region to region.

The exact cause of multiple sclerosis is unknown, but scientists believe that it is an autoimmune disease. This means that the immune system treats the myelin sheath as a foreign body, attacking it in the same way as a virus or bacteria.

The main risk factors include:

Age: Diagnosis is usually made between the ages of 20 and 50.

Gender: Women are more likely than men to develop MS.

Ethnicity: The disease is more common in northern European populations.

Genetic factors: The disease can be transmitted genetically.

The incidence of MS is higher in populations living further from the equator, suggesting that sun exposure may influence the risk of developing MS.

The following risk factors and their association with the development of multiple sclerosis have been studied but are currently not confirmed by scientific studies. Further research is needed to confirm whether or not they are associated with the disease.

Exposure to toxic substances such as heavy metals or certain solvents.

Multiple sclerosis is a debilitating disease that severely limits the mobility and independence of people living with the disease. However, it is possible to remain independent thanks to specialist equipment that makes everyday tasks easier and reduces the impact of multiple sclerosis on a person’s life.